Is crowdfunding still an alternative?

Is crowdfunding still an alternative?

Last week, on the 27th of October, °neo by Five Degrees hosted an exclusive meetup focused on the Future of Alternative Lending. During this meetup, two experts, Anne Hakvoort and Ronald Kleverlaan shared their insights and opened the discussion on crowdfunding, inclusive lending, and self-regulation. Let's dive into these topics and look at the highlights.

Crowdfunding started small, but in a short time, it has grown into a big business and has achieved great things. For businesses, this alternative lending solution supports various stages of their development, from exploring the initial idea and funding it to expanding. However, according to Ronald Kleverlaan,  and Anne Hakvoort "Crowdfunding platforms are using more and more institutional money'' which is shifting the purpose of its nature. So, crowdfunding remains a very popular way to raise funds for entrepreneurs, but today, there are questions about its evolution and regulations.

The purpose of these regulations is to have a transparent and equal functioning in all countries of the European Union. The first European crowdfunding regulation came into force in October 2020, and its legislation followed up a year later. However, for many years, crowdfunding platforms' biggest hurdle has been the need for standard rules and diverging licensing requirements across the European Union. This fact has resulted in high compliance and operational costs, which prevents crowdfunding platforms from efficiently scaling the provision of their services.

Will regulations and transparent rules allow for more consistent crowdfunding growth in all European countries?

According to Ronald Kleverlaan, Chairman Stichting MKB Financiering, and Director of the European Center for Alternative Finance at Utrecht University: "Regulating crowdfunding is complicated due to its constant evolution and broadness. When we talk about evolution, we are talking about the fact that the basic principle of crowdfunding deviates from its original purpose." He highlights that: "The initial funding crowd for these platforms is pushed away by institutions that go much faster through their investment procedures". So, the primary purpose of crowdfunding remains, but the funding source comes from a different direction. Therefore, many regulations and legislations suit the market but should stay trivial. 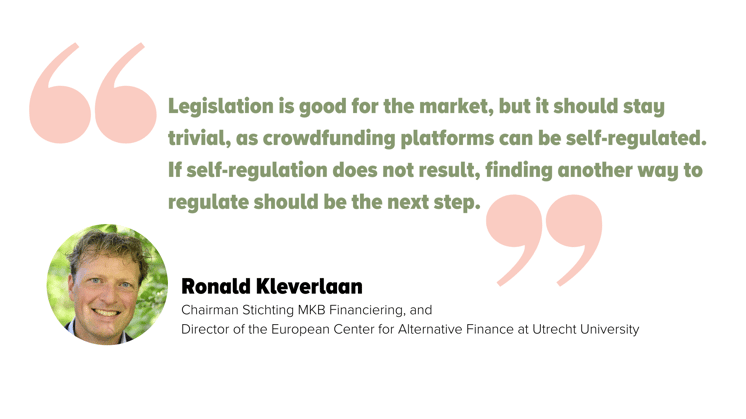 In contrast, Anne Hakvoort, Attorney at FG Lawyers, states that "If there is enough support for the legislation by the majority of the market concerned, it might work in a limited area - resulting beneficial for the industry. But we will not see as much development with self-regulation as with legislation."

Inclusive alternative lending means that everyone should have access to It. How can this be possible when we know that women entrepreneurs and immigrants (who wish to open a business) have limited access compared to Dutch entrepreneurs?

According to Ronald Kleverlaan, these groups do not get a positive response to their request due to their underdeveloped network, as they are scattered, relatively small, and informal. In other cases, these groups usually do not have social platforms. However, by depriving these groups, The Netherlands is missing out on many opportunities in the alternative finance sector.

One of the main reasons for excluding these groups is that The Netherlands' finance sector still relies on the traditional system, in which everything is very selective. We can take an example of a loan application program using AI that is programmed with a traditional system's data. These programs used for loan applications are already biased from their creation and automatically refuse requests that do not meet the so-called "traditional" selection criteria. The subject of inclusivity is, therefore, relatively complex because it would involve changing the country's entire financial system. But then, is there another way to improve this market?

Although crowdfunding will remain a beneficial funding resource for SMEs and entrepreneurs, its nature may shift. This alternative lending solution is a vast constant evolutive subject that needs to be regulated and understood. However, its scope is too broad to reassess it as a whole. In the coming years, we expect institutional investors to take more market share and shake this industry and impending regulations will have a significant impact on this market.

If you are interested in the evolution and future of Alternative Lending, read our blogs to learn more.